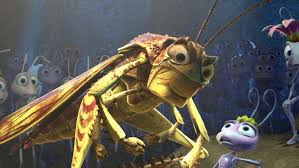 Often lost in the wonderful canon of Pixar films- perhaps overly simple or less unique than their best works, like, say Wall-E or Ratatouille- A Bug’s Life, the studio’s second outing, really is a fantastic animated adventure, putting a comic twist on Kurosawa’s The Seven Samurai. A colony of ants, every year, is exploited for food by a group of vicious grasshoppers, led by Hopper (voiced memorably by Spacey). One ant, Flik (Foley), regarded as the colony screw-up, decides to search for bigger bugs to help the colony fight back. He mistakenly recruits a failed circus troupe. Not as bright or vivid visually as it might once have been, the animation is still impressive, and the writers at Pixar are among film history’s best. A Bug’s Life is quite funny and full of endearing characters.