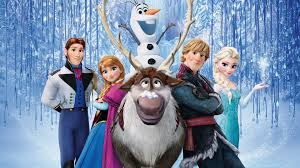 Before Tangled was released in 2010, Dinsye bigshot Ed Catmull said it would be the last Disney princess film. Tangled was a huge success, and four years later comes Frozen, with two princesses for the price of one. Anna (Bell) feels shut off from her sister Elsa (Menzel) after the death of their parents. On Elsa’s coronation day, Anna, as well as the rest of the kingdom, learn the secret she was concealing when she turns the land into a frozen tundra and runs away. Anna sets off to find her with the help of her new companions: courageous Kristoff, his reindeer Sven, and the loyal snowman Olaf. Frozen was a colossal success, and it’s easy to see why. It has all the hallmarks of a Disney classic. It fails to rank for me with the cream of Disney’s crop, however, falling somewhere in the middle of the studio’s canon. Mainly, I feel there’s a huge gulf between the classic work of Alan Menken with the various brilliant songwriters on old Disney films during the Renaissance, and the soundtrack to Frozen, as popular as it is. There are plenty of catchy tunes, but they’re just not on the level of, say, The Little Mermaid, or Beauty and the Beast. The story lacks a strong villain in my eyes, and though the female empowerment elements prove a nice message, films like Mulan and The Princess and the Frog covered similar territory with more compelling endings.