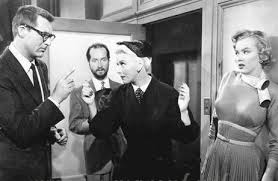 Monkey Business is an earnest attempt at recreating the screwball style of comedy which was popular in the late ’30s, early ’40s, but had already gone out of style long before 1952, when this film was released. Starring Cary Grant, Ginger Rogers, Charles Coburn, and Marilyn Monroe, you couldn’t find a better cast. Directed by Howard Hawks, who made a couple of the finest screwball comedies in His Girl Friday and Bringing Up Baby, Monkey Business doesn’t quite work. The zany antics and energy that were so wonderful and amusing in Bringing Up Baby strike me as juvenile here. Perhaps that’s a strange complaint to make about a film in which the characters take a formula that causes them to revert back to their youth. At the comedy’s center is a lovely, loving marriage between Grant and Roger’s characters, and this works, but the stakes aren’t high enough; there’s not a serious enough threat to their inevitable happiness. Too bad.