John Hughes was a genius of comedy writing. I’ll just list his credits: National Lampoon’s Vacation (1983), Mr. Mom (1983), Sixteen Candles (1984), Breakfast Club (1985), Weird Science (1985), Pretty in Pink (1986), Ferris Bueller’s Day Off (1986), Planes, Trains, and Automobiles (1987), Uncle Buck (1989), Christmas Vacation (1989, which I’ll probably watch before this challenge is through), and Maid in Manhattan (2002) among other films. He was amazingly prolific. Look at the years those films released. Deviating from my plan to start my Christmas Challenge with movies I hadn’t seen, or at least hadn’t seen in a long time, I watched one of his films I didn’t include in that list: Home Alone. Written and produced by Hughes, Home Alone was the biggest success of his career, and, like all of his work, funny, creative, and emotional; also a tremendously powerful piece of nostalgia for me. It’s probably one of the first handful of movies I’ve seen in my life. A wonderful film, so when I saw it flash across the Netflix popular tag, I realized its been a few years since I last saw it, thus I felt compelled to watch. 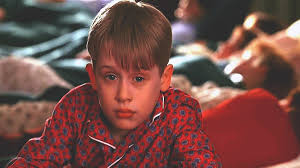 Kevin McCallister (child superstar, Macauley Culkin) is kind of a brat. He’s supposed to be anyways, though I’ve always taken his side in that long introductory scene. He seems fine. It’s his massive family that seems rotten. They’re all gathered together (aunts, uncles, brothers, sisters, mother, father, bed-wetting cousins), preparing to go off to Paris, France the next morning, where they’ll spend their Christmas. Kevin wishes he had no family and tells his mother so after fighting with his bullying older brother, Buzz. She sends him to bed in the attic to cool off. The next morning, an electrical outage keeps the alarm clocks from working, and the McCallisters oversleep. In the madhouse scramble to get dressed and get over to the airport in time for the flight, the McCallisters forget about bratty Kevin, asleep in the attic. He wakes up to an empty house and believes that his wish has come true. No family, and a big, beautiful house all to himself for Christmas. It promises to be a barrel laughs until he figures out a couple of robbers, Harry (Joe Pesci) and Marv (Daniel Stern), plan to steal from every house on the block, including his. Seeing as all the neighbors are out of town, Kevin decides that it’s up to him to protect his house and booby traps the joint leading to the pretty well-known, spectacular final thirty minutes.

Hughes was big on mixing laughter with tears and gave all his comedies a sense of pathos that was as memorable as the jokes. In Home Alone, he gives us Kevin’s mother (Catherine O’Hara) desperately trying to make it home to her son and a subplot with Kevin’s elderly neighbor who’s been estranged from his son. The laughs, meanwhile, come fast and easy. Kevin is a precocious, remarkably resourceful kid, and it’s fun to see him outsmart the adults, especially Pesci and Stern’s dimwitted but menacing robbers. Pesci is one of those performers who can pretty much make anything he says funny. Maybe it’s his voice. He amuses me.

Macauley Culkin was one of the most famous kid stars of all time. He did other films, but he’ll always be remembered for slapping his hands to his face and screaming in Home Alone; a gift and a curse, I’m sure. He’s really good, a natural, carrying a film and selling the outlandish idea of an 8-year-old being smarter than adults.

Technically speaking, Home Alone’s not much to write about. It’s an inspired idea delivered straight and told plainly, like all of Hughes’ films, even ones like this that he didn’t direct. John Williams’ score mixed with the exciting soundtrack that includes the Drifter’s version of White Christmas is a major component of Home Alone’s success. Some critics harp on the film’s implausibility. Seems like a waste, since the premise is clearly absurd and the film is worth suspending disbelief. It’s fun. I might end up watching it again before Christmas is over.