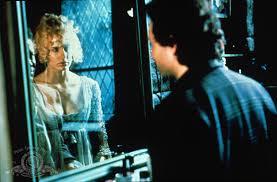 High Spirits has the ingredients for a really good comedy. Peter O’Toole plays owner, Peter Plunkett, who sees his shabby, secluded hotel in Ireland going to pieces, and quickly devises a scheme to pick business up. He’ll pass his hotel off as a haunted resort, and appeal to the paranormal enthusiasts, but as the first wave of tourists roll in, he discovers that the place might actually be haunted. One of the main problems of the film is star, Darryl Hannah, as Mary, a lovely ghost who is saved by one of the tourists, Jack (Guttenberg), and subsequently gushed over. She’s playing an Irish lady, which means she does an Irish accent (which is notoriously difficult to do). Hannah’s accent work is distracting and mars many of her scenes, key scenes at that. Jack and Mary’s romance is meant to be one of the main charms of the film, and it doesn’t come off thanks to that accent. O’Toole on the other hand proves once again to be a fantastic comedic actor. Unfortunately, he’s not in this film more. Overall, there’s much to enjoy. High Spirits is silly fun, but something as small as a main character’s accent really did hamper the entire picture.