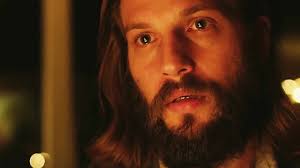 Dinner parties can be dreadfully awkward affairs. This film is the dinner party from hell. Will (Marshall-Green) is surprised one day with an invitation from his ex-wife, Eden, played by Tammy Blanchard (they tragically lost a son), and her new husband, David (Huisman). Will arrives, greeted by his old friends, but quickly comes to suspect that something strange is going on. In classic mystery-thriller fashion, no one’s suspicious but him. The hosts, Eden and David, are acting really odd, one friend, Choi, hasn’t shown up even though he said he would, plus, there’s two unexplained strangers as guests, and why did David lock all of the doors? Excellent psychological thriller smartly done. You know that something is going to happen, you’re certain it won’t be any good, but director, Kusama, builds the suspense to a fever pitch, and the resulting climax is well-worth the wait. Plays off of the anxiety of someone who is antisocial having to interact with a large group of people. You could also point out its relationship to Luis Bunuel’s Exterminating Angel wherein a group of people at a dinner party are unable to leave a dining room, and react to the growing madness. Terrific finale, strong acting from a terrifying premise.