A new one for me, though I feel as though I’ve seen this film a hundred times before. My expectations weren’t high, but 86% on Rotten Tomatoes suggests a decent enough time, and so I took the plunge. For my second movie in my Christmas Film challenge, I watched A Christmas Prince. A Netflix exclusive, which at this point (though the company is ambitious and looking to go bigger) is slightly better than made-for -T.V movie, A Christmas Prince benefits from lowered expectations. It’s the kind of film that goes down easy, makes no waves, hits its marks, and whatever other clichéd metaphors come to mind. It won’t surprise you. It doesn’t exceed expectations. It’s exactly what you’d expect, and that’s alright. 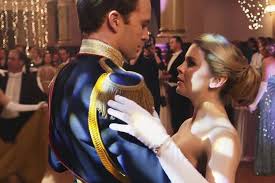 Rose McIver, terrific in her CW series, iZombie, stars as Amber Moore, an aspiring journalist, stuck at the copy-editor’s desk. For some reason, she’s given the opportunity of a lifetime by her boss. King Richard (I don’t know if this is his name, but this is what I’m calling him) of Aldovia (a made-up kingdom full of people with British accents) has died, and his son Prince Richard (played well by Ben Lamb), a playboy and layabout according to most media and tabloids, might not show up to his own coronation. If he doesn’t appear, he would be abdicating his throne, leaving the country in the hands of his weaselly, scheming cousin Simon (Played Theo Devaney). Amber is given a ticket over to Aldovia where she is to report back on any developments. Simply trying to get an interview at the palace (security at this place is rather lax), Amber gets mistaken for a new tutor for the princess, Emily (Honor Kneafsey), a mischievous little girl with spina bifida. Now in prime position to break any story, Amber must keep up her deception, dig up dirt on the royal family, and control her growing feelings for the Prince, who’s not at all what she thought he’d be.

Okay, the positives. I’ll start with the setting. The royal palace where most of the film takes place is beautiful and a real asset to the fantasy. The actors are all good and likable and attractive. The romance is pretty well-modulated without too much schmaltz. Basically, all the familiar beats are played and performed well. There are a few small decisions I liked, one being that the young Princess finds out that Amber is not a tutor but a reporter early on. The whole main character lying, wanting to tell the love interest, but someone else telling them first thing is old-hat. This film at least keeps it from being the whole show. I also wasn’t interested in Amber taming the bratty young princess (you know like Maria does with the von Trapp family). I think A Christmas Prince wisely moves past this quickly. The Princess is only a pain briefly but becomes Amber’s ally early on. Their relationship is one of the film’s more charming aspects. Director Alex Zamm, responsible for a film I would nominate for worst of all-time (Chairman of the Board), does a fine job here. It’s not particularly well-crafted, but not conspicuously hack either.

A small complaint I have is that it’s not very Christmasy. Christmas is in the background, and not a necessary part of the plot. In any case, I’m a man of many different film-watching moods. Sometimes I want to see a thoughtful, challenging film. Sometimes I just want to watch things blow-up. One mood I occasionally indulge but rarely advertise is a rom-com mood, when I want to watch a film with beautiful people in beautiful places in a story that you know will end with happily ever after. In this mood, A Christmas Prince works.