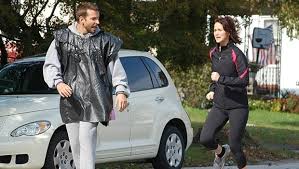 A romantic comedy about two people with mental disorders would seem ill-advised. Silver Lining’s Playbook pulls it off. Pat Solitano Jr (Cooper) returns home to Philladelphia after a court-ordered stint in a mental hospital to live with his parents, Pat Sr. and Dolores (De Niro and Weaver). It’s a highly dysfunctional, very loving family devoted to the Eagles (complete with superstitions), and one of the film’s main charms. Though obsessed with reuniting with his ex-wife who has a restraining order against him, Pat Jr. meets and can’t help but be drawn to Tiffany (in a terrific performance by Lawrence), a recent widow with mental problems of her own. Tiffany reminds me of the great leading ladies in classic screwball comedies (Katherine Hepburn in Bringing Up Baby and Carole Lombard in My Man Godfrey namely). She’s an oddity, but totally confident and lovable. In the end, the film comes down to a bet Pat Sr. makes on the Philadelphia Eagles and his son’s dance competition (with Tiffany as his partner). Despite its predictability, the ending works and gets a lot of laughs. Silver Lining’s Playbook excels due to its performers and how they play off one another. David O. Russell creates great characters and lets his actors go. It’s a joy to watch.