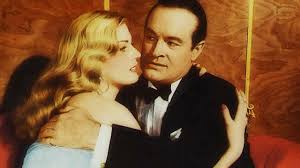 Bob Hope and Fernandel in the same movie is a great idea. Having them play thinly veiled versions of themselves named Bob Hunter and Fernydel is also a great idea. The writers and filmmakers stopped there. They gave no attention to plot or pacing, and offer too few jokes. The stars themselves are entertaining enough to carry this clumsy espionage spoof to the point of watchability at least, but no further. The story revolves around Bob unwittingly stumbling into a criminal plot by purchasing a script that has the names of counterfeiters written in it in code. I honestly could barely follow that thread throughout the film, and, instead, settled for watching Fernandel, who steals the show.