First, the clichéd, age-old question: is it a Christmas or a Halloween film? The clear, non-insightful, only-correct answer is that The Nightmare Before Christmas is bizarrely, wonderfully both. I’ve made a habit of watching it either Halloween or the day after as an essential Holiday transitional piece. I gobble up the Halloween candy and fortify myself mentally for the onslaught of too-early, bad Christmas music around the immediate corner. I love The Nightmare Before Christmas, and prefer it as my first Christmas movie each year, because it’s dark, sly, and has a hint of malice to it. Until late in November, my yuletide cheer hasn’t switched on yet- it’s not Christmas time until Thanksgiving is over- and I’m not ready for all of your red and green treacle. Films like this one, Bad Santa, or Die Hard are more my speed until that point, at which time I fall victim to the Christmas spirit, and you can throw any level of corn at me, and I’ll bite. 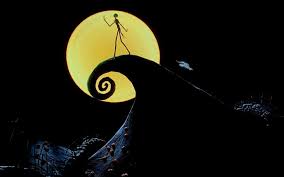 Anyways, I watched The Nightmare Before Christmas this year before work, on the first of November, by myself through Netflix, on a small computer screen. I’ve seen it enough times for the setting and conditions of my viewing it to be irrelevant. It’s a wonderful film.

If you haven’t seen it, I’d like to invite you to reexamine your priorities. Sprung from the mind of Tim Burton (Batman), executed and rendered in stop-motion by Henry Selick (Coraline, James and the Giant Peach), it tells the story of Jack Skellington (voiced by Chris Sarandon and Danny Elfman), loved and revered in his home community of Halloweentown, a land dedicated to the Fall holiday. Jack’s going through something of an existential crisis (there’s really no way of gauging how old he is, but I assume he’s middle-aged). “Is this all there is?” he ponders.

And I grow so weary at the sound of screams

And I, Jack the Pumpkin King

Have grown so tired of the same old thing.

It’s an instantly relatable feeling, and The Nightmare Before Christmas has its heart and depth, that something that makes it more than just a breakthrough in stop-motion animation, more than a series of special effects, or a ghoul show. When Jack stumbles into a new world, one dedicated to Christmas, he believes he’s found his new destiny. Astounded by what he sees, he breaks into the film’s best song (which is saying something), What’s This. He decides to give Santa Claus a vacation, and fill in for him during Christmas. This proves a folly, one foreseen by Sally (voiced by Catherine O’Hara), always nearby, who, too, longs for something else in life. She’s desperately in love with Jack (clueless), and wants to be more than  Dr. Finkelstein’s lab assistant. Unable to convince Jack that his Christmas idea is a disastrous one, he goes through with it, and the results are humorously macabre. In the end, like John L. Sullivan in Sullivan’s Travels, Jack Skellington finds meaning in being himself and takes pride in doing what he does best. It’s a meaningful theme given special credence considering how weird and oddball of a story we’re just gifted with, pulled off beautifully by filmmakers being themselves.

The whole production is a testament to strangeness and originality. How much time do you allow for appreciating the little things in film? Take some time with The Nightmare Before Christmas. It’s a gorgeous movie from a design standpoint, and seamless, technically amazing in its craft. No strings attached, you don’t see the hands of the artists unless you want to peek behind the curtains. You can watch it and be swept up in the incredibly efficient storytelling (76 minutes) without wondering how they make clay models look like they are talking (moving their lips) effectively. However, when you’ve seen it twenty times and that question persists, perhaps it’s time to investigate. I’m sure there’s some “Making of” featurette I could watch.

Danny Elfman’s soundtrack is pretty iconic and it, like the film, is a major part of an entire counterculture. It’s to the goths what Easy Rider and its soundtrack were to hippies.

Strong and dependable start to my Christmas movie viewing.