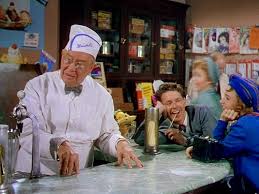 Set in the 1920s, an extremely wealthy businessman, Samuel Fulton (Coburn), with no family, reminisces about the girl who got away many years before. Fulton is prepared to leave her family, the Blaisdells, everything, but his lawyer and executor suggests meeting them first. Fulton heads to small town Vermont under a false name and moves in with the family, undercover, to see if the Blaisdells are worthy of his millions. Directed by Douglas Sirk, noted for his subversive melodramas, particularly the ones he made in the 1950s, Has Anybody Seen My Gal? is one of his overlooked classics. Subtly sardonic at times, surprising, and a glorious example of how beautiful technicolor can be, this film, eventually, provides the obligatory happy Hollywood ending, but not the one you’d expect, and not before twisting its narrative through several turns that amount to a scathing cautionary tale of how money changes people. If that sounds grim, know that this is actually a completely charming and funny film, and that the brilliance of Sirk is that he can have it both ways; satire and light-hearted Hollywood fable, depending on how much thinking you feel like doing.  Also gently pokes fun at many of the fads and slang of the 1920s.