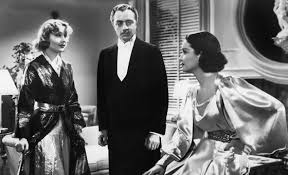 “All you need to start an asylum is an empty room and the right kind of people.”

Zany gal. Dysfunctional family. Straight guy. Classic screwball comedy. Director Gregory La Cava made a handful of them in the 1930s. In My Man Godfrey, two rich and spoiled sisters, Irene (Lombard) and Cornelia (Patrick), compete in a callous scavenger hunt to find the last thing on their list: a “forgotten man,” code for vagrant or hobo apparently. Cornelia comes upon shabby Godfrey Smith (Powell), a derelict with dignity, in a junkyard, who shoves her in a pile of nearby ashes when she offers to pay him to attend a society function with her, and help her win the scavenger hunt. Flighty Irene gets a kick out of seeing her domineering sister and rival knocked down a notch, and introduces herself to Godfrey. She’s an odd one, but harmless and kind, so Godfrey offers to help win the scavenger hunt, appearing at the Waldorf-Ritz Hotel with her. Smitten with her forgotten man, Irene offers a job to him, and Godfrey Smith’s life as a butler begins. He soon finds himself a butler to, “the craziest family ever,” as he puts it. The two daughters, he already knows. Cornelia’s out to get him back for rebuffing her in the junkyard, and Irene is head over heels in love with him. The mom, Angelica (Brady), is a vain, demonstrative, loud, chatty, woman with a live-in boy-toy in Carlo (Auer). The dad, Alexander (Pallette), is a long-suffering, over-worked man running low in money, thanks to his wild family. These are all wonderful, unforgettable characters played beautifully by the cast. Alan Mowbray as Tommy Gray, a man who knows Godfrey under a different name, and Jean Dixon as Molly round it out.

Screwball comedies are said to be subversions of traditional romantic comedies. Like many of the best, My Man Godfrey offers a man in over his head, and a woman taking the lead role in the courtship. Carole Lombard, who died a few years after this film in the prime of her career, walks the right side of the line between kooky and crazy, charming and annoying, adorable and childish. Made during the Great Depression, she provides the greatest push towards delightful romantic fantasy, making My Man Godfrey splendid escapism. Rather than pursuing a beautiful woman, the man, Godfrey, fends her off for most of the runtime, before ultimately giving up and giving in during the final glorious sequence of the film. “Stand still Godfrey. It will all be over in a minute,” Irene says to him as she surprises him in his home with a minister ready to perform their marriage. To this day, most romantic comedies end with the man giving a big romantic speech.

My Man Godfrey, made over 80 years ago, is a timeless treasure to me. I love movies in general, but Hollywood classics above all, and My Man Godfrey is perhaps the best. Broken down piece by piece, each line of dialogue is witty, the black and white photography is shimmering, the performances perfectly modulated. At its center stands, of course, William Powell, the gold standard straight man. Straight men are so often overshadowed by their eccentric costars, but not Powell. His reactions to the antics of the Bullock family are as funny as the antics themselves. Finally, if you look at My Man Godfrey, or any classic film, as not just a film, but as a time capsule, you’ll glimpse what was considered attractive 80 years ago, what was funny, what was clever, what felt fresh. That My Man Godfrey is still attractive, funny, clever, and fresh is astounding.