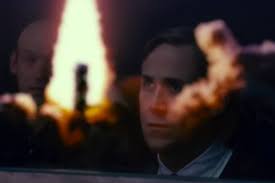 Neil Armstrong, American hero, first man to set foot on the moon, and family man, gets the A-list Hollywood treatment. Played by Ryan Gosling, reteaming with Oscar winning La La Land director, Damien Chazelle, Armstrong appears in First Man as a quietly driven man, unflappable and stoic. The film opens with the death of his young daughter. He cries for her, and seems unable to cry again after, despite the loss of friends and colleagues throughout Project Gemini’s run. Gosling makes Armstrong a credible man, complete with flaws. He struggles to relate to his wife, Janet (Foy), and two sons, communicating less and less as the movie goes on. His sit-down talk with his sons before taking off for the moon is, for me, the best scene in the film. I was less interested in Janet’s passages. The strong supportive wife is crucial to the story, but not exactly gripping. The rest of the cast of characters is filled out with familiar faces that make up for the lack of character development. Chazelle goes for more of the impressionistic approach, less compelled to give us all the details, instead opting to immerse us in the key events and let us fill in our own blanks. We know much of the history already. I think his approach is right, though I still came away from the picture underwhelmed. It’s technically astounding, well-acted, and paced, but perhaps too stiff, especially for those like myself with only a marginal interest in space exploration.