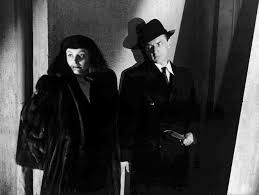 An innocent young woman, Mary Gibson (Hunter), gets sucked in to the plotting of an underground satanic cult while searching for her missing sister, Jacqueline (Brooks). The premise sounds more exciting than its tame representation in The Seventh Victim, perhaps strongly hampered by its contemporary Hollywood production codes. It’s not that I demand gore and action in a horror film. The Seventh Victim is produced by the great Val Lewton who made several better features working with less. I also don’t mind the idea of the satanic cult being a society of intellectuals rather than violent sadists, which would be more obvious, and a less fresh take on the subject, but by the end of the show, I was struck by how abruptly the film ends, and how little really happens. It’s an amazing case when the most memorable, interesting thing about a movie is the hair of someone in the supporting cast. Jean Brooks as the lost sister is stunning, unforgettable, and iconic thanks to what I would describe as a long haired bob that matches her fur coat. The story, unfortunately, as it unravels, is confounding.