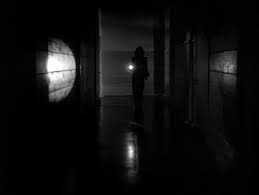 If the theories and ideas of Sigmund Freud were going to make their way into film, then noir was the natural destination. Noirs were typically psychological thrillers built around ambiguous characters and sordid settings. The great German director Fritz Lang made several noir films after moving to Hollywood, and although Secret Beyond the Door might be his most articulate in terms of surrealism and psychological motivations, it’s ultimately unsatisfying thanks to a plot borrowed from Hitchcock’s Rebecca and twisted until it makes no sense literally. A woman, Celia (Bennett), is swept off her feet by an enigmatic architect, Mark (Redgrave), and marries him after a quick courtship. Come wedding night, she finds that Mark has a son from a previous marriage that ended in his wife’s death, and that might not even be his biggest secret.  As an exercise in style, genre, and symbolic expression, Secret Beyond the Door is fascinating, but this is a rare case for me when the superficial positives (as potent as they are) don’t outweigh the story’s clumsiness and contrived happy ending, which is simply preposterous. A product of its time, but the conclusion might have worked better as a more explicitly perverse love story rather than a happy ending that’s only happy because, in classic Hollywood, it had to be.