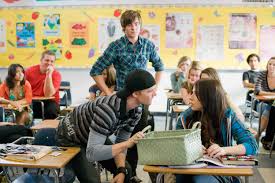 I don’t know that I’ve ever seen basketball portrayed well (realistically) on film, so that when I say I’ve never seen basketball portrayed worse than it is in 17 Again, starring Zac Efron, that’s saying something. Fortunately, lame basketball sequences aside, 17 again is a fun film. Mike O’Donnell (Perry) is like the reverse of Tom Hanks in Big. He’s an adult who longs for the carefree days of his youth. On the cusp of a divorce, with kids who no longer speak to him, O’Connell’s wish is granted, and he turns into 17 year old Mike (Efron). How Efron becomes Perry in twenty years according to the film’s logic will forever be a mystery, but there are several scattered laughs, mostly thanks to supporting actors  Lennon and Hardin, and that over-the-top movie high school atmosphere (psycho bullies, models for popular kids, vicious cliques) which is a complete fantasy, but eternally entertaining.