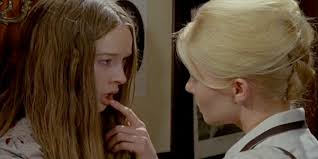 The Italian giallo films are generally over-the-top, devoid of hard logic, stylish, violent, tawdry, and entertaining as hell. They ushered in the slasher flick, and remain among the best  examples of the subgenre.  What Have You Done to Solange? made in Italy, set in England, with an international cast and poor English dubbing, is such a film; a fantastic slasher-horror-mystery. A philandering professor, Henry (Testi), is out on a boat with one of his young students, Elizabeth, when she glimpses a bizarre and ugly murder. One of her fellow classmates is stabbed, and soon others follow, but she can’t get a clear image of what she’s seen.The murder mystery is hardly surprising, but gradually a revenge element creeps in giving the story some substance, and a truly gruesome undertone. Don’t question the characters’ decision making or why every female character in the film looks like a model and just be impressed by the incredibly deft camera movement and fun directorial flourishes.