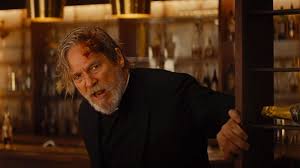 “Good artists copy. Great artists steal.” So says technology pioneer Steve Jobs. Every story has been told in one way or another, and every filmmaker borrows from the greats that came before. Bad Times at the El Royale bears many of the trademarks of a Quentin Tarantino film: chapters, nonlinear storytelling, shocking violence. Indeed, in more than just the style, Bad Times at the El Royale is reminiscent of The Hateful Eight. Here, seven strangers with dark secrets meet at a secluded, rundown motel split between California and Nevada. Who they are along with their motivations gradually become clear as they spiral towards violent conclusions. All this said, the similarities understood, the important thing is that Bad Times at the El Royale is an excellent film. Best of the year so far. The actors, Jeff Bridges and Cynthia Erivo especially, give their characters and this film a pathos sometimes missing in even the best of Tarantino’s work, and the El Royale offers a handful of exceptional, memorable set pieces. Some films focus solely on shock and awe, confusing the audience, or seeming ultra-hip. This film starts with a great story, and then tells it in a way that maximizes the suspense.