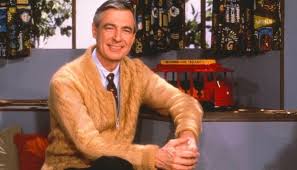 Fred Rogers reminds me of Longfellow Deeds from Frank Capra’s Mr. Deeds Goes to Town (1936); meek, quietly charismatic, odd, earnest, and full of conviction. The star and creator of Mr. Roger’s Neighborhood, a children’s program that ran for over thirty years, has become an unofficial sainted figure, and this documentary examining his life and career does an incredible job of honoring him, attempting to understand him, and showing him as a human being with flaws too. Fred Rogers was not  like anybody else, and through a series of interviews with the people who knew him best, Won’t You be My Neighbor reinforces his tremendous legacy. It also showcases his uniqueness as a person. My fear for the film was that it would be a glossed over account of his life. I was curious to see how they would handle sensitive topics like racism and homosexuality, but also how Fred Rogers handled social issues, almost certain that the documentary would avoid such things. It doesn’t. Strong film.

One thought on “Won’t You Be My Neighbor (2018, Directed by Morgan Neville) English 7”