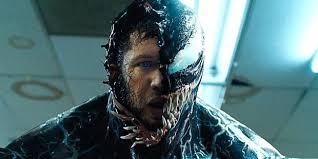 Occasionally, not often, I’ll watch a film that makes me question my own cinematic taste. I’ll watch Blade Runner 2049 and be bored to tears, or, on the opposite end of the pole, I’ll thoroughly enjoy a film like Venom. Torched by critics, who, to be fair, only reaffirmed my belief that the Tom Hardy, superhero vehicle would be a massive waste of time, a box-office dud, and an embarrassing cash-grab by Sony, I was surprised five minutes in to find myself intrigued by what was going on, and shocked by the end to find I liked what Sony did with the movie. Does that make it a good film?  I decided to let some time pass. Maybe I was influenced by the natural high I sometimes achieve eating Walgreen’s candy at the movie theater. Best to keep my opinion to myself, I thought. But I couldn’t keep it to myself. I texted a dozen people that Venom was, against all odds, a good film, and now, two days later, I feel confident enough to put it in writing. Venom is a good film.

Eddie Brock leaps from the comic book pages onto the big screen in a solo film that not many people thought would ever happen, and even fewer felt he deserved. Played by Tom Hardy, in a bewildering performance best described as Nicholas Cage-esque (I’m leaning towards that being a compliment), Brock is a hot-headed, investigative reporter who runs afoul of corporate thug, Carlton Drake (Ahmed, an odd but entertaining choice), resulting in him losing his job and his fiancée, Anne (Williams). Drake has some kind of sinister, shady plan afoot involving symbiotes from outer space (more interesting to watch than to explain; the film, to its credit, recognizes this), and Brock ends up merging with one of them. The symbiote, named Venom (I don’t remember why the symbiotes speak English but they do) inhabits Brock and can communicate with him through thoughts. Venom has seemingly unlimited power, though we learn his weakness is fire and high-pitched noise. Brock, as he grows accustomed to the powers, goes after Drake who’s planning to take over the world-typical super villain stuff-and Venom’s motivation for helping him ends up being quite funny rather than perfunctory.

Sony and the filmmakers eschew the problems of most superhero origin stories. Venom is never boring. It’s not dark and brooding, which, I know a lot of people were upset that this isn’t R rated. Maybe a dark and reflective Venom could have worked (it worked so well for Ang Lee’s Hulk), but this Venom is funny (usually intentionally), fast, cheesy, over-the-top, fresh, silly, and fun. At its core, it’s a compelling bromance between Eddie Brock and his symbiote friend, Venom, and it took me by surprise.