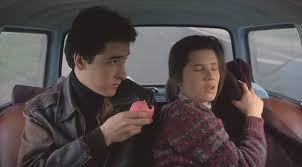 A teenager going to extreme lengths to have sex is pretty cliché in movies. So too is the fun, free guy falling for the prim, proper girl. The Sure Thing manages to spin a sweet, engaging romantic comedy out of these well-worn elements. Cusack plays college freshman, Walter Gibson, smart, but a bit of a slacker. Daphne Zuniga plays Alison Bradbury, a hard-working, no nonsense girl, no doubt vying for valedictorian in her future. A cross-country road trip brings them together- Walter’s promised by a friend, on the opposite side of the country, a gorgeous girl who’s a sure thing to sleep with him, and Alison’s traveling to L.A to spend Christmas with her square fiancée.  The two’s journeys cross and eventually entwine to the dismay of both, before they gradually come to like one another. Cusack’s Walter is rather obnoxious at first; overly obnoxious I’d say, but once the film gets passed setting up the antagonistic romance, Cusack becomes much more likable, and the two leads work well together. All of the inevitable outcomes are earned and satisfying.