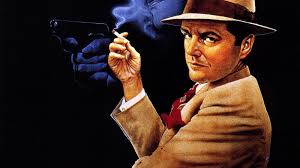 I love private detective stories, and all of the conventions of a private detective story: hard-boiled protagonist, femme fatale, deceptively easy case that spirals into something more sinister, mystery, romance. The template was in place long before Chinatown, labeled a neo-noir upon its release in 1974, but Chinatown just might be the very best private detective film (The Long Goodbye, released just a year earlier has a similar stake on the claim). The great Jack Nicholson plays Jake Gittes, hired by the wealthy Mrs. Mulwray to catch her unfaithful husband in the act, but things go south for Jake when he finds out that the woman who hired him isn’t actually Mrs. Mulwray, and the apparently unfaithful husband turns up murdered. Once he meets and gets involved with the real Mrs. Mulwray, played beautifully by Faye Dunaway, Jake’s case becomes a tangled web of power and corruption, and seems only to lead to the film’s surprising yet inevitable conclusion. John Huston, with only a couple of scenes, is unforgettable.