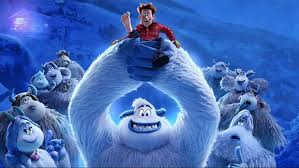 I wish these animation studios, if even just occasionally, would risk making a terrible movie for the sake of reaching for greatness. Mix it up. For every three bland, guaranteed-to-turn-a-profit pictures they produce, how about make one where they take a chance? Instead, they’ve settled in, satisfied enough to make lucrative mediocrity. Everyone knows Pixar is still king of the mountain. Walt Disney Animation Studios is doing great work again (though their upcoming slate bears too many sequels), and Laika is making special movies (go watch Kubo if you’re unfamiliar with their work). Meanwhile, Dreamworks, Sony, and Warner Bros. keep giving us unexceptional, uninspired offerings, and I’m bored of it. Smallfoot, Warner Bros.’ latest, imagines a world where yetis are afraid of humans (does it sound like Monster’s Inc. to you too?), though they’re told by their village leader that humans, or smallfoots, don’t exist. Channing Tatum voices Migo, a skeptical yeti, who meets a human, but without evidence, is unable to prove it. He then sets out to find the legendary smallfoots, and show his people that they’re real. It’s a fine story, with enough humor and colors and cookie-cutter songs to entertain, but I’m remembering that Warner Bros. animation was once a powerhouse producing Looney Tunes shorts and features, and now, no matter how much money this makes, they are completely irrelevant. Everything about this feature is just okay, and I find that sad.