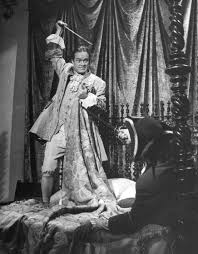 You could pretty much set Bob Hope in any situation, plot, or setting, and have an entertaining comedy on your hands. In Monsieur Beaucaire, very loosely based on a short novel by Booth Tarkington, he plays the titular character, a French barber posing as a Duke to fool the hostile Spanish court. Meanwhile, the real Duke, Duc le Chandre (Knowles), poses as a servant, and romances the Spanish princess (Reynolds). I enjoy a good swashbuckler and 18th century political intrigue, and Hope is a blast. He generally seems to do his best work in genre films like these where he feels like a fish out of water. The story is slight, but the film, at least takes its story serious enough to make us reasonably interested in the plot, and not just Bob Hope’s quotables. Not as memorable as The Paleface, but enjoyable in its own right.