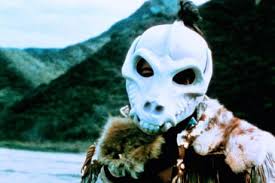 James Earl Jones’ narration starts. The picture fades in, and we see a post-apocalyptic world overrun with children and teenagers. The remaining population has sectioned itself off into biker gangs, living by a self-made code, mistrustful of strangers. When a big-league corporation tries to take over a nearly deserted city, two rival bike gangs that live there, team up and fight back. City Limits has all the elements of a cult-classic 1980s action flick. True, it’s a little bit derivative of Mad Max, but that’s no great crime. The crime is that this film is an atrocious bore, crudely done, with wasted talent in front of the camera, and no discernible talent behind the camera. The visuals are grimy, under lit in the extreme, the costumes look like the actors brought their own costumes, and the plot unfolds incomprehensibly. It’s astonishing how poorly executed this premise was. Calling this a B-Movie is an insult to a lot of great B- Movies.