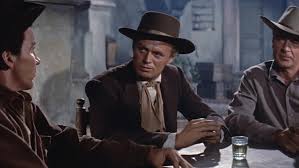 Not Treasure of the Sierra Madre. Not a classic. Not timeless. Garden of Evil is, nonetheless, an involving saga about a group of men-stoic Hooker (Cooper), cynical Fiske (Widmark), emotional Luke (Mitchell), and meek Vicente (Mendoza)- who agree to accompany beautiful Leah Fuller (Hayward) through Apache territory to rescue her husband, with similar themes of greed and men ruined by their quest for gold. Taking the premise of Treasure of the Sierra Madre and adding a woman is a promising wrinkle, but Garden of Evil is too content to be a pot boiler. The actors give flashy speeches, their lines end on suspenseful cue, and the characters aren’t given enough depth beyond what the great cast of stars bring by sheer presence. What can be said in the film’s favor is that the score (by the great Bernard Herrmann) is suitably brash, and the story unfolds, hitting all of the basic marks of entertainment, though leaving a more special, thoughtful western on the table.