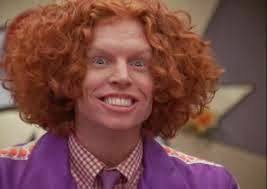 This isn’t fair, or nice, but I strongly dislike Carrot Top. Before his demon clown personality even set in, and cast its stench upon this abysmal movie, I strongly disliked him. Before he opened his mouth, and said some lame joke involving some lame prop, I knew immediately that I did not want to see him on screen for another second, but I persevered, watching Chairman of the Board, wherein the “comedian” plays Edison, a dreamer, inventor, and surfer. After a chance encounter with a multimillionaire, Armand McMillian (Oscar nominee Jack Warden in the who cares stage of his career), Edison is left with the majority share of a major company, and uses his newfound power to push out his inventions. He also falls in love with his assistant, Natalie (Thorne-Smith). Carrot Top’s performance and personality justify my bigoted feelings about his appearance. This film is garbage besides him, and something less than garbage because of him.