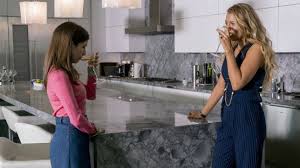 Gone Girl came and shocked a lot of people. Amy Dunne, portrayed by Rosamund Pike, is an unforgettable character. Like every huge Hollywood hit, Gone Girl has a host of imitators. What separates A Simple Favor from the cheap imitations is its playful take on the sensationalized material; director Paul Feig (Bridesmaids) and writer, Jessica Sharzer pace the twisty plot with the occasional riff that feels like a wink at the camera. They know this is derivative of Gone Girl and its rip-offs, so that A Simple Favor works both as a comedy-a spoof of sorts- and a thriller-the plot is absorbing and surprising. Anna Kendrick plays Stephanie, the perfect stay-at-home mom who befriends Emily (Lively). They both have grade school age sons, but that’s where the similarities would seem to end, until Emily disappears and it comes out that both women have secrets. Lively plays her role straight and plays it well, creating an enigmatic character that you know is trouble but can’t help but be drawn towards. Anna Kendrick gives the material its gently satirical edge; a fish out of water at first glance, but with the ability to surprise you. Like most of these stylish, over-cooked thrillers, A Simple Favor is incredibly entertaining, well-plotted, and effective, but loses something upon further viewings.