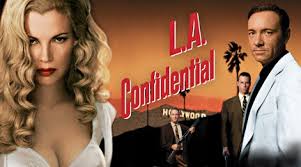 Curtis Hanson’s 1997 film, based on James Ellroy’s novel, has many elements usually found in a bad adaptation: bastardized plot, watered-down themes (especially the racist qualities of the protagonists), and a cast that veers rather strongly from their original character descriptions , including an Australian and a New Zealander playing American cops in key roles. It’s a credit to the filmmakers, or truly everyone involved- the writers, the cinematographer, the stars, composer Jerry Goldsmith, who did the terrific score-that instead of feeling like a hack adaptation, L.A Confidential feels like a perfect movie; perfectly paced, perfectly performed, and perfectly filmed. Kevin Spacey, Russell Crowe, and Guy Pearce play three disparate cops, at odds mostly, who all get swept up from different angles into a massive crime plot involving prostitution, police corruption, heroin, and Mickey Cohen. Kim Basinger merges two Hollywood clichés (hooker with the heart of gold and the classic femme fatale) in her role as Lynn Bracken, but makes the part vital, and reminds us why we like the clichés.  The plot, as it is, seems as complex and mystifying as any ever portrayed on screen, and remembering that it’s working with maybe a third of the book begs the question of how I ever seemed to understand the book. In any case, those tough choices, the decision to go for Ellroy’s spirit rather than exact faithfullness, were judicious, and the resulting film is a major triumph.