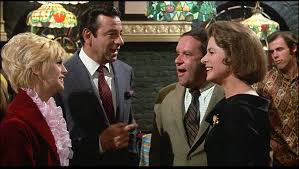 Flower power, short, spiraling hairdos, and Quincy Jones’ music fill out the background in this decidedly ’60s romantic comedy. Walter Matthau, with his stooped posture and estimable deadpan, doesn’t have to do much to get laughs, but here, gets a fine role as Dr. Julian Winston, a cad and a half, who tells the women he sleeps with that he’s married, to halt any thoughts they might have of long term commitment. His newest conquest, Toni Simmons, played by Goldie Hawn, who won an Oscar in this, her debut, turns the tables on him by threatening suicide, forcing his hand since he’s completely hooked on her. He wants to marry her, but she feels that she needs to meet with his soon-to-be ex-wife first. He has two options: come clean and tell the truth, OR! get his loyal, spinsterish dental assistant, Ms. Dickinson (Bergman), to play his wife for a spell. You can guess which option he chooses. Funny premise generates a funny film, though it’s an odd composite of a stars, and indeed, if one thinks too hard on it, they don’t really go together. However, they’re all quite wonderful in their parts separate from each other. Ingrid Bergman’s given the most sympathetic character, and it’s a pleasure to watch her in such a brazen comedy, shedding- but only partially- her saintly image. Written by frequent Billy Wilder collaborator, I.A.L Diamond, and directed by Gene Saks, following his hit, The Odd Couple (1968).