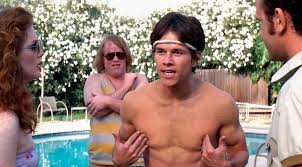 Sweeping view of the late ’70s porno scene, and Eddie Adams, A.K.A Dirk Diggler’s (Wahlberg) career ups and downs rising from busboy to star before hitting rock bottom in the early ’80s. There are at least a dozen indelible characters in Boogie Nights, from director and self-fashioned auteur, Jack Horner (Reynolds), all the way to the lovesick Scotty (Seymour Hoffman), and Paul Thomas Anderson’s prodigious skill is constantly on display. Many consider Boogie Nights his first masterpiece, but it falls just short, in my book, of the likes of his later films like Magnolia, The Master, or There Will Be Blood. Certain aspects feel derivative of Tarantino’s Pulp Fiction, and at times the overtly comedic tone which makes the film a blast to watch, hold it back from ever being truly moving.