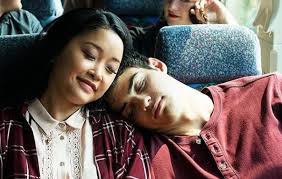 High schooler, Lara Jean Covey (Condor), is the introverted type with a close relationship with her family-widowed father and two sisters, one older named Margot (Parrish), and one precocious younger sister named Kitty. She also has a hopeless crush on her childhood best friend, Josh (Broussard), who happens to be dating Margot, or was dating her until they broke up just before Lara’s new school year. Lara channels her love for Josh into a series of love letters. She’s always written a love letter for every crush she’s ever had, meant to be seen by no one. Somehow, they get out (it’s no great mystery how, but I won’t mention it here), and Lara goes to school to find several former crushes now know about her feelings. She’s especially mortified to find that Josh received his letters, and her solution is to pretend to date another boy, Peter (Centineo), with the two  starting a fake relationship together for separate reasons. A contrived, predictable plot like the one this teen rom-com works from is not a problem when it’s written and performed as expertly as it is here, by relative newcomers no less. Many scenes you will see coming, but no bad scenes, no shortage of likable characters and genuinely cute moments rather than cutesy drivel.