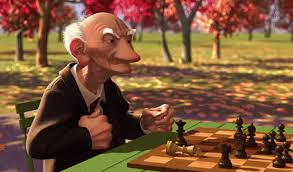 Pixar’s first great short. Where their previous efforts showcased innovation in the 3-d Computer Animation field, Geri’s Game tells a simple yet memorable story to go along with the technology. An elderly man plays a spirited game of chess with himself as an opponent. Perfectly paced and edited, and though Pixar’s animation continues to evolve and becomes more sophisticated with each day, I don’t believe Geri’s Game has been topped. Odd. Funny. Clever.