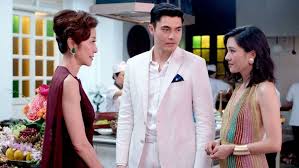 Not sure what to expect, American born Economics professor, Rachel Chu (Wu), is invited by her longtime boyfriend, Nicholas Young (Golding), to come meet his family in Singapore and attend his best friend’s wedding over Spring Break. To her great surprise, she enters a world of tremendous wealth: sports cars, designer clothes, stunning jewelry. Though they’ve dated for over a year, Nick never told her about his family’s legacy and downplayed the vast fortune waiting back home for him; so much so that Rachel’s single mother speculated that Nick must come from a poor family. He also never told her about the army of scheming, gold-digging women hoping to snag him, the heir to the Young family dynasty,  and who,  later, monitor Rachel’s every move as soon as she steps foot on the island. Rachel accepts the overwhelming situation heroically, hopeful to make a good impression on Nick’s mother, tough and cunning, Eleanor Sung-Young (Yeoh), as well as his Grandmother, Shang Su Yi (Lu), but it quickly becomes clear that she has few allies within the Young family, seemingly within all of Singapore. She has Nick, who loves her and who stands up to his family when they say she’s not in his class, Goh Peik Lin (Awkwafina), a charismatic friend from college, Nick’s cousin, Astrid (Chan), as kind as she is glamorous, although she’s facing problems of her own with a husband having an affair, and Oliver, another one of Nick’s cousins, who gives Rachel fashion advice. You’d be right in thinking that Crazy Rich Asians has all the makings of a daytime soap opera, or the setup of a conventional rom-com you watch once on an airplane flight and then never watch ever again. Yes, Crazy Rich Asians is a family melodrama and a romantic comedy, and yes, it’s typical in much of what it’s doing, and yet it’s better than most of the films of its kind. It’s funnier, more appealing, more spectacular, and more colorful than most. To hit all of its genre markers, while seeming fresh and funny, is an accomplishment, and a strong part of the film’s freshness lies in its cast of new stars and the glimpse at a different culture, a culture that’s thousands of miles away, and feels further. Much of entertainment is rooted in escapism, and Crazy Rich Asians is an easy diversion. No doubt, indebted to Jane Austen’s works, specifically Pride and Prejudice, the poor girl ending up with the rich Prince Charming trope will likely never die out. When you think that fairy tale’s been done to death, a film like Crazy Rich Asians proves that it still has juice.