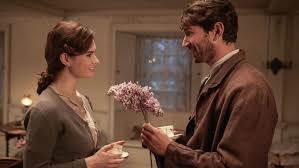 Just after World War II, a writer based in London, Juliet Ashton (James) starts a correspondence with Dawsey Adams (Huisman), from Guernsey, who tells her of his unique and peculiar book club. The club began during German occupation, which intrigues Juliet, and she soon goes to visit. Arriving on the island, she grows fond of the members of the club as she learns of their remarkable story. A very familiar romance plot mixes with a different perspective of the war to fine results. I had no idea that Guernsey was occupied by the Nazis, and that lesson alone makes the film more than its typical story book romance. Though its sadder elements failed to strike a chord, and you know exactly where the story’s going, sometimes you want what you expect, and this is a well done movie.