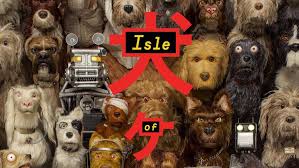 Set ahead in dystopian Japan where dogs are reviled for carrying an incurable disease, Mayor Kobayashi signs a decree that isolates the canine population to trash island. Once there, Chief (Cranston), a stray, and four other alpha dogs spend their days scavenging for food before the arrival of a human boy searching for his missing dog gives them new purpose. It’s a unique and tremendous vision Anderson and his team of animators create, but, like all of his films, I simply felt no connection to the material. His distinctive style keeps me at a distance. I find Isle of Dogs more impressive than moving, more amusing than funny, and not endearing enough to be memorable. The voice work, the character design, and fluid, imaginative camera movement are extraordinary, but Anderson rarely reaches for more, and there is more to film than technical brilliance.