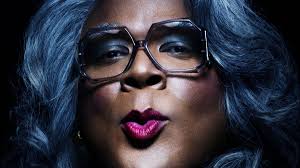 Brian Simmons (Perry) worries about leaving his rebellious daughter alone for Halloween, especially since there’s a frat house party going on next door, so he calls his Aunt Madea to come and watch over her. I’ve never minded any of the Madea movies. They’re crass and not very good, but I end up laughing at least 3 or 4 times. That’s not enough to recommend any of them, and A Madea Halloween is par for the course with a bevy of ignorant behavior and sporadic sermonizing.