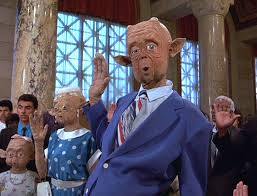 A young alien, given the nickname Mac (mysterious alien creature), crash lands on Earth, separated from his family. Discovered and befriended by brothers Eric (bound to a wheelchair) and Michael, Mac looks to reconnect with his family. If this premise sounds awfully similar to E.T: Extra-Terrestrial, it’s because Mac and Me is a blatant rip-off of that classic, released just six years prior. Add to that, Mac and Me is a lousy rip-off, devoid of any imagination, and damned by poor design for the central alien figure. There are two especially bad scenes: one where Eric loses control of his wheelchair and falls off the side of the cliff, and another set in McDonalds, where everyone begins a choreographed dance number. The latter is mind-blowingly bad. Baffling, really, and not the only embarrassing moment of product placement. The former is unintentionally hilarious. Surprisingly, the acting is professional, keeping Mac and Me out of the seventh circle of movie hell where The Room and Troll 2 live.