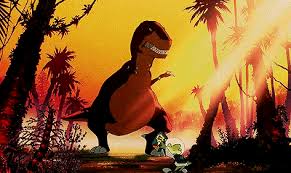 Rex (Goodman), once a vicious predator, transformed by a scientist’s invention into a kind dinosaur, travels to the 20th century to fulfill children’s dreams. He joins a group of transformed dinosaurs meant to visit the Museum of Natural History, but they get sidetracked after meeting two runaways, who get locked into a dangerous contract at a spooky circus. There’s plenty here for children to enjoy, but We’re Back lacks the intelligence, depth, and artistry of the best animation, many examples of which were coming out at about the same time as this film (The Lion King in 1994 and Aladdin in 1992).