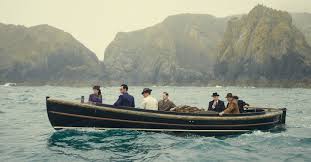 10 strangers meet on a secluded island for different reasons, or so they think, since the real reason becomes clear soon after arrival: someone has brought them there to pick them off, one by one. Each of the ten strangers has an alleged crime they got away with. Some admit to their crime, some don’t, but after searching the island for their killer and finding no one, they realize that the killer has to be one of them. Not the first adaptation of Agatha Christie’s classic, and I might give the edge to Rene Clair’s 1945 version for its sense of style, but this is easily the closest adaptation to the feel of Christie’s novel. With the number of times I’ve read or seen this story, it’s an incredible achievement that this 4 part miniseries had me hooked as if I didn’t know what was coming. Genuinely scary, exceptionally performed, and the flashbacks offered to slowly establish the characters are a very nice touch.