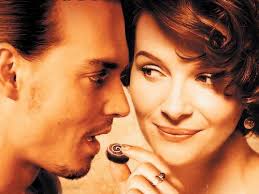 Vianne Rocher (Binoche) and her daughter, Anouk, wanderers across Europe, open a chocolaterie in a heavily religious and traditional town in France, 1959. The town is lorded over by Comte de Reynaud (Molina) who quickly brands Vianne and her chocolate as sinful, ostracizing her from the rest of the villagers. Gradually the chocolate and her kindness win them over. Criticized for being shallow, or condescendingly referred to as a pleasant trifle, I think the film succeeds in its own brand of magic realism, and deserves more credit. The cast is fantastic, led by Binoche whose smile makes her turning an entire town upside down believable, and Molina, working with a difficult, thankless role as the town bully, manages to give his character enough depth for us to actually care about his transformation.

One thought on “Chocolat (2000, Directed by Lasse Hallström) English 7”