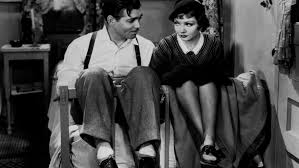 Fairy tale romance given a 1930’s great depression era grit as newspaperman, Peter Warne (Gable) finds the story of his career fall right into his lap in runaway heiress, Ellie Andrews (Colbert). He agrees to take her to her fiancee in exchange for the write up. The difficulty is that neither of them has much money to work with, and, on top of that, the two fall in love. Many memorable funny moments, including the iconic, still classic scene of Ellie stopping a car, and many more cute moments shared between leading man and leading lady. Perhaps the first great romantic comedy, director Frank Capra allowed his stars many small, quiet moments to show they cared for one another.

One thought on “It Happened One Night (1934, Directed by Frank Capra) English 10”