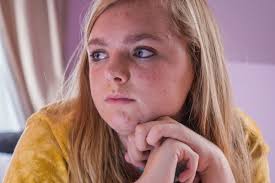 In Kayla Day, writer/director, Bo Burnham, has given us a protagonist who is smart, kind, thoughtful, motivated, self-improving, and fun. Where, outside of school, do these traits routinely go completely unnoticed? Unfortunately for Kayla (played wonderfully by Elsie Fisher), that’s exactly where she is. Eighth grade. On the cusp of high school, which is even worse. Since she is shy, often awkward, like anybody at that age with self-awareness, not model thin, and cursed with acne, the rest of her qualities go unappreciated, and she gets described as “the weird girl.” The bright side is, for people like Kayla, life does get better, and most of the events during this time, like the ones shown in this film, really aren’t the end of the world, though it feels like they are in the moment. The greatest accomplishment of Bo Burnham’s directorial debut is making us feel it too. The triumphs, the tragedies of 14 year old girl, Kayla. Yes, we laugh, but we wince too. There were moments that I watched this film through my fingers, like it was a horror flick. It’s a unique film that has you watching through your fingers and smiling at the same time.

As for the plot, I’m not sure Eighth Grade can be said to have one. With the accuracy of a documentary, it follows its subject, taking a fly on the wall approach, on the last days of her junior high life. Kicking off with Kayla’s class being subjected to a sex ed video (one that attempts to better relate to the students by acting “hip”), the proceedings only grow more embarrassing from there. She gets invited to the most popular girl in school’s birthday party; by the girl’s mom, not by the girl herself, who refuses to acknowledge Kayla’s existence. She goes to a pool party where everyone seems perfectly comfortable in their bathing suits except for her. She has a crush on a guy: Aiden. A kid who makes faces and weird noises in class. She hears that he broke up with a girl who wouldn’t give him dirty pictures of herself, so there’s a horrifying episode where Kayla thinks dirty pictures could win her his heart. The film also goes one or two darker places, without ever seeming trumped up or anything else but completely natural. One of the film’s highlights is Kayla’s single father, who obviously embarrasses his teenage daughter, simply by existing and being around. He manages to be utterly oblivious at times to her struggles but is also always there when she needs him.

As for the director, I’ve been aware of Bo Burnham, who’s had an impressive amount of success at such an early age, as a comedian for some years now, without ever enjoying his schtick, but a little research shows that he’s a man of many talents: published poet, stand-up comic, musician, now filmmaker. And Eighth Grade isn’t some minor indie success, suggesting one hit wonder. He is a genuine filmmaker, and Eighth Grade is an excellent film.