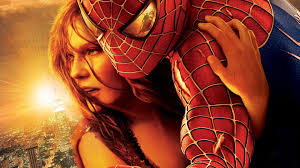 “A hundred cares, a tithe of troubles and is there one who understands me?” The first two Spider-Man films centered around Peter Parker’s burden. The idea that he has to sacrifice his personal desires in order to fulfill his duty as Spider-Man. In Spider-Man 2, everything’s a mess in Parker’s world. He (Maguire) loves M.J (Dunst), but feels that he can’t be with her without putting her life in danger, and spends most of the movie disappointing her in some way or other, as she settles for another man she doesn’t love. Parker’s best friend, Harry (Franco) wants Spider-Man dead for killing his father in the first film. On top of that, Parker can’t pay his rent. Director Sam Raimi gave the character compelling problems, and a sense of humor that didn’t take away from the drama. Actually, this film is largely a melodrama with misunderstandings, unrequited love, twists. Doctor Oc is the main villain in this picture, and there’s a fantastic scene of him and his robotic attachments wreaking havoc in a hospital wing (a memorable homage to classic monster movies, I feel). The film starts out with one great scene after the other, and by the end, I was happy to find, that Sam Raimi’s Spider-Man 2 remains one of the best super hero movies.