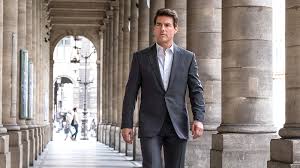 Another year, another mission. If that sounds cynical, know that it’s intentional, but know also that I’m tremendously impressed by the Mission Impossible franchise’s proven longevity.  Who, besides Tom Cruise maybe, believed that twenty two years later, he would still be playing Ethan Hunt and topping the box office? When a franchise’s optimistic goal is three films to form a trilogy, I doubt anyone could have predicted six Mission Impossibles. More than this, the truly remarkable thing is that they seem to be getting better.  They keep upping the ante. So I’m impressed on one hand, a little fatigued on the other, which is basically how I felt throughout this 2 and 1/2 hour movie.

In Fallout, Tom Cruise’s Ethan Hunt, the tireless and most valuable asset for top secret government agency, IMF (Impossible Missions Force), is up against an anarchist terrorist group known as The Apostles. Apparently, risen from the ashes of Mission Impossible 5’s The Syndicate, The Apostles have been growing and plotting underground for two years since Hunt’s capture of Solomon Lane, and now they’re on the verge of a catastrophic attack on the world’s holy cities Mecca, Rome, and Jerusalem. Hunt’s mission (should he choose to accept it): stop The Apostles from acquiring plutonium, which they need to power their nuclear weapons. *Spoiler Alert* The Apostles win the first round, and so it’s up to Hunt and his IMF team-Luther (Rhames) and Benji (Pegg)-along with a CIA operative, August Walker (Cavill),  to retrieve the plutonium before The Apostles start a nuclear holocaust. Making matters more difficult, wild card MI6 agent and Hunt’s reluctant love interest, Ilsa Faust (Ferguson) shows up, and he can’t tell whose side she’s on. Then there’s also a little matter of a rat among Hunt’s team. Between the CIA and IMF, someone’s feeding the enemy information. The CIA thinks it’s Hunt.

Mission Impossible: Fallout does a nice job throwing a lot up in the air, and maintaining a level of intrigue, though I’ll admit being confused often. I do think, by the end, the plot comes together, and I’m sure a second viewing would help. So too would a viewing of Mission Impossible: Rogue Nation before seeing this one, which I failed to do. Unlike other Mission Impossible entries, Fallout is a direct follow up to the previous film. Tom Cruise is incredible. Much has been made about him doing his own stunts, and yes it is partly a marketing tool, but he deserves the praise, along with the filmmakers for some truly amazing stunt work and action sequences. Where these films always lose me is the third act, when all of the smoke has cleared, and everything’s understood. It’s partly inevitable: the mystery is always more interesting than the solution, but I find that each film loses steam, even while picking up the action, in the climax. Fallout takes its time getting to the final act, and then takes its time during the final act. It’s too long. At least twenty minutes too long. When you’re ready for a film to be over, just as the climax begins, that’s a problem. A more polarizing problem is the level of believability involved in these films. Many won’t care, and perhaps it’s unfair to bring up when talking about Mission Impossible, but I could not get over the physics of much of the action. Surviving plane crashes. Climbing a rope dangling from a helicopter (twice!), rock climbing after an intense fight. Ethan Hunt is a super hero, and I alternate between being entertained and bemused by him.

Fallout succeeds as an elegant, intelligent action blockbuster, but doesn’t surpass what I see as both enjoyable hallmarks and limitations of the durable franchise.