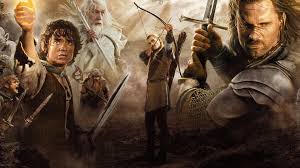 The final chapter in Peter Jackson’s landmark fantasy series finds Frodo (Wood) and Sam (Astin) following Smeagol (Serkis) into a trap on their quest to rid Middle Earth of the One Ring once and for all. Sauron, having suffered a defeat at the end of Two Towers, launches an all out assault on humans in this installment. Aragorn (Mortensen), knows that Gondor, his kingdom, will not stand a chance unless he can muster reinforcements, so he looks for aid from the Dead Men of Dunharrow (an army of undead warriors) with the help of Legolas (Bloom) and Gimli (Rhys-Davies). Gandalf and Pippin fight to defend, Gondor stronghold, Minas Tirith from a devastating siege from Sauron. Wholly gratifying end to the Lord of the Rings tale, with multiple absorbing story lines, dozens of indelible characters, and a vast array of technical skill. One of the great visual spectacles of modern cinema. Surprisingly, I found The Two Towers superior to The Returns of the King, which ends on at least thirty minutes of unnecessary epilogue. The battle of Minis Tirith also ends frustratingly with the Dead Men of Dunharrow finishing the battle within minutes. While not quite “deus ex machina,” because there is plenty of build up towards it, the conclusion of the battle did make the preceding hour seem like a waste. And then there’s the eagles. They are “deus ex machina,” and a bewildering turn in the plot. Still a great film.

One thought on “Lord of the Rings: The Return of the King (2003, Directed by Peter Jackson) English 9”