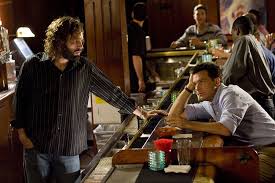 This workplace comedy set in a flavoring-extract factory takes a few dark turns starting with a dim-witted employee, Step Wilkinson, losing a testicle in a freak accident. This brings criminal drifter, Cindy (Kunis), into his life seeing an opportunity for a million-dollar lawsuit, and into the life of head boss and founder, Joel Reynolds (Bateman),  who’s dealing with a lack of passion in his marriage. Tempted by Cindy, he hires a male prostitute to seduce his wife, in order to let himself off the hook in his own affair. Laugh out loud funny at times, especially Joel’s exchanges with his annoying neighbor and Ben Affleck’s drug-pushing bartender character, the overall film is surprising but unsatisfying. It lacks any emotional connection and a rooting interest with the protagonist. It also lacks the relatability that made Mike Judge’s previous film, Office Space, a classic. Individual moments far outshine the film as a whole.