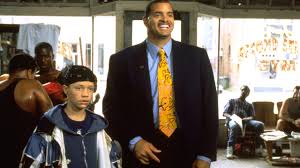 Sinbad stars as Secret Service Agent Sam Simms, tasked with being the personal bodyguard to Luke Davenport, the bratty, trouble making son of the United States’ President. It’s impossible to remove nostalgia from the equation in reviewing a film like this. It’s a Disney comedy in the tradition of The Mighty Ducks movies or That Darn Cat which all came out around the same time. Goofy, funny at times, with likable performances from the leads.