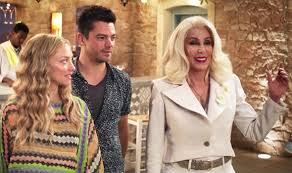 Belated sequel, but also prequel to the jukebox hit play turned musical, Mamma Mia, starring Meryl Streep as Donna Sheridan and a host of ABBA songs. If you remember, that film concerned  Donna’s daughter, Sophie (Seyfried), getting married and wanting to meet her father for the first time. She deduced that one of three men-Harry (Firth), Sam (Brosnan), and Bill (Skarsgård)-was her real father as her mom had flings with them all around the same period. This sequel is about that period. Lily James plays the young Donna, as she sails to Greece looking for adventure, accompanied again by an ABBA soundtrack. This is one of the better examples of modern musicals ( the genre’s gone out of fashion) and easily the best jukebox musical (I hate Moulin Rouge). Where the first film was fun and extravagant, this film is more. It’s a  strong movie, fantastic show, and all-around good-time.