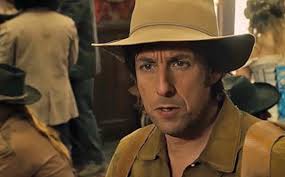 Western send-up starring Adam Sandler as Tommy Stockburn, a warrior separated from his parents and raised by a native american tribe. After meeting his father, Frank Stockburn (Nolte), for the first time, and seeing the old man being carried off by a gang of bandits demanding $50,000 or else, Tommy turns to a life of crime in order to gather the money. Along the way, he discovers five other brothers or half-brothers: Mexican Ramon (Schneider), doltish Lil’ Pete (Lautner), black Chico (Crews), guilt-stricken Danny (Wilson), and the mumbling Herm (Garcia). Critically panned, and juvenile enough to deserve it, The Ridiculous 6 is nonetheless a pretty creative film. Some of the gags are inspired, some are stupid, others don’t work, and the film is too long. There are dozens of cameos, some better than others. I happened to enjoy the random, completely unnecessary scene of Abner Doubleday (Turturro) inventing baseball.